To the UK B-Boy Championships and Beyond! | B-Boys and Breakdancers For Hire

OK, I’ll admit it “and Beyond” in this post’s title really meant “and Nando’s”, but it’s right opposite the Brixton O2 Academy. How can you go to the B-Boy Champs without fuelling up on some delicious peri-peri chicken?! Even Jinjo Crew and Endangered Species were feasting next to us before the battles started. So it must be true – if you want to be one of the best b-boy crews in the world, it’s important your diet consists of great tasting chicken!

Here’s the official Sony Ericsson UK B-Boy Championships video player to show you the build up and the final event. Each week it will be updated to show you lovely people a different video from around the planet leading up to the world finals, so remember to keep coming back and watching each week…

Continue reading and I shall reveal all…

Last year 5 of us ventured down to Brixton O2 Academy to see the crew battle finals on the Sunday. Man was that an amazing event or what?! Russia’s Top 9 killed it and took home the title!

Here are a couple of valuable learning experiences from last year:

So this time we thought we’d be adventurous and go down for the full weekend. As a load of us were going, we didn’t all have to cram into one vehicle. Which turned out to be a tiny bit less painful. Happy times 🙂

Saturday at the UK B-Boy Championships

Unfortunately we couldn’t see anything more than a sea of various hair styles and hats with flailing legs over the top on the stage in the main room on the Saturday because it was a low stage and they didn’t have the projectors set up as they do on the Sunday at the Brixton O2 Academy.

Normally one might be a tad aggravated that they’d paid £20 ish for the Saturday ticket just to see an array of the backs of peoples heads. However, there happened to be a smaller IBE room where the footwork battles, seven2smoke and cyphers were going off. So we stayed in there and had a close up view of all the action. We saw some intricate footwork, a 1 armed b-boy busting out mills and headspins – RESPECT, and an intense 20 minute long seven2smoke battle. I took a few videos on my phone, I might update this post with some footage if I get time…it depends if there’s a demand to see it. Do you want to see the footwork battle final and the seven2smoke battle? Leave a comment and let me know.

Sunday at the UK B 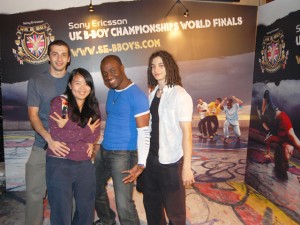 After an awful nights sleep due to being ill with a mega cold and headache we had a leisurely stroll around Camden Lock Market and Covent Garden. To be honest I didn’t think it was all that great, but that could be because I felt like I was going to die!

Was it just the places we went to or does London have a much higher ratio of ugly people to attractive people than Leeds??

After the mandatory Nando’s visit in Brixton we queued right around the venue to get in. Damn that was a long ass queue but I made it in alive!

The popping and locking battles were quite impressive. The B-Girl crew battles were awesome! The Solo B-Boy battles were dope! But you know what we’d all gone there to see…

Let’s get ready to rumble! The main event  – the crew battles

The UK’s Soul Mavericks were up first against Russia’s Top 9. It was close, but to be honest I thought Soul Mavericks took it, obviously last years winners can’t really go out in the first round though.

As you’d expect, each crew brought along some bad ass moves and complex routines. So I imagine it’s pretty tough to judge, maybe that’s why some of their decisions were absolutely retarded!

After a day of meandering around London and standing up for hours my back was absolutely killing me! Cracking it every few minutes didn’t really relieve much of the aching, so I spent most of the event sitting in the bar watching the battles live on the HD TV screens, maybe the best view possible other than actually being on the stage – no annoyingly tall people stood in front!

The Ukraine were pulling out some crazy moves and had awesome style to go with it but they didn’t make it through to the final either.

So it ended up being Top 9 vs Endangered Species going head to head for the title. We watched the battle but had to leg it to catch the last tube train back to the car before the result was revealed. Fortunately an attractive lady jumped on the tube just after us and it turned out she’d also just been to the event and caught the results…

As if you’d want to win if you got booed 3 times during the event 🙁 They had some super bad ass moves and were generally really good, but I’m definitely not the only one who thought they shouldn’t have made it through to the final and that Top 9 took it.

Overall it was a fun diddly weekend. Shame I was ill…but I survived! I highly recommend you go next year, even if just for the Sunday. You will definitely enjoy it more so than anything else you might possibly plan for a Sunday in October, like Church or nursing a hangover after Freshers week – NO! Don’t do that, go to London and watch some of the best b-boys on earth get their funk on, you won’t regret it, Brownies honour!

“I have made this letter longer than usual because I lack the time to make it short.”

Tune in next time when I’ll probably talk about something absolutely incredible, as always.

3 thoughts on “To the UK B-Boy Championships and Beyond!”